Why You Shouldn’t Sell Your Stocks in May This Year

“Sell in May and go away” is probably the most widely cited stock market cliché in history. Every year a barrage of Wall Street commentaries, media stories, and investor questions flood in about the popular stock market adage. In this week’s Weekly Market Commentary, we tackle this commonly cited seasonal pattern and why it might not play out this year, similar to recent years.

The Worst Six Months of the Year

“Sell in May and go away” is the seasonal stock market pattern in which the six months from May through October are historically weak for stocks, with many investors believing that it’s better to avoid the market altogether by selling in May and moving to cash during the summer months. 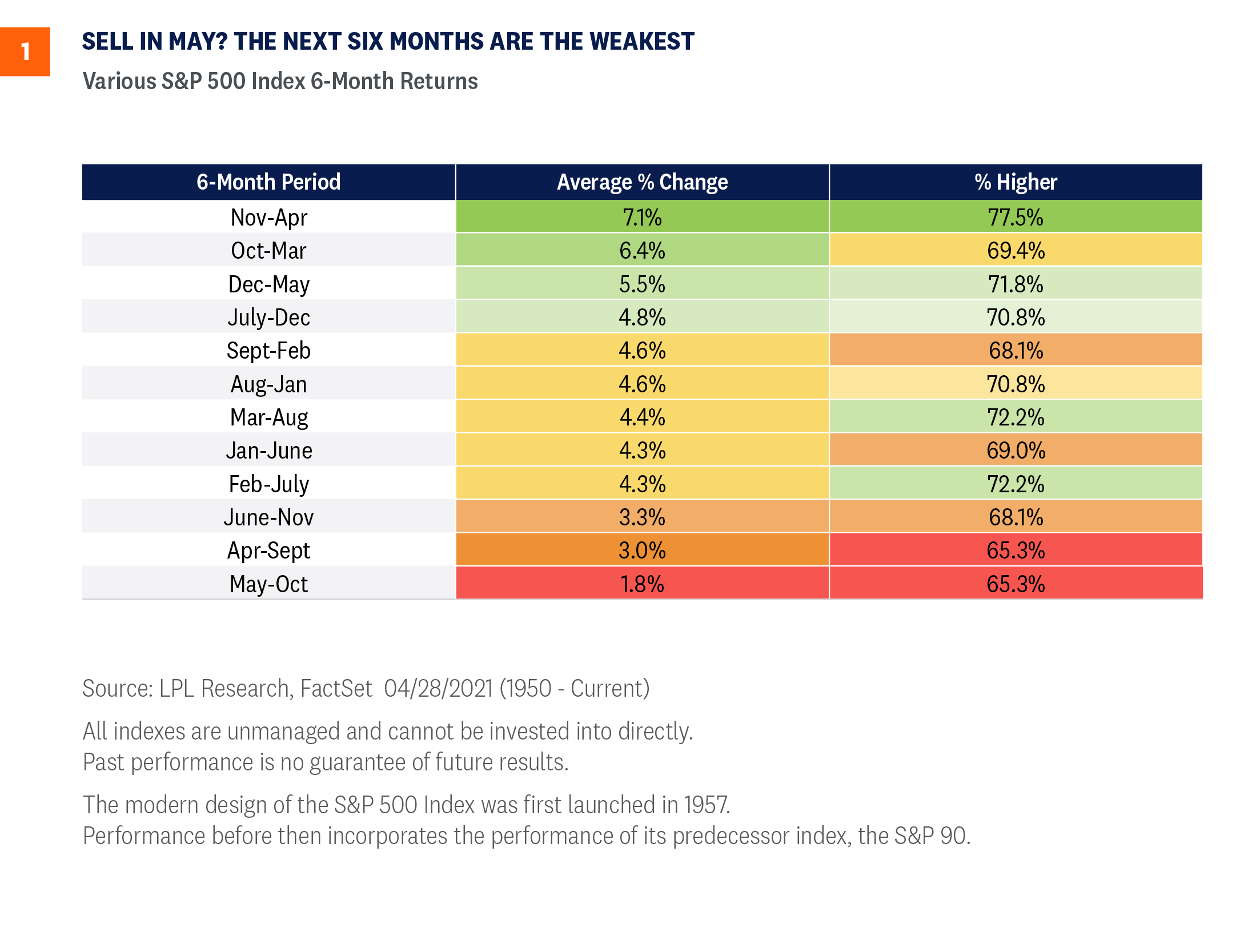 As [Figure 1] shows, since 1950 the S&P 500 Index has gained 1.8% on average during these six months, compared with 7.1% during the November to April period. In fact, out of all six-month combinations, the May through October period has produced the weakest—and least positive—average return.

But as with many things in life, it is never that simple.

What have you done for me lately?

As we head into this seasonally weak period, keep a few things in mind. First, the S&P 500 Index has closed higher during the month of May in eight of the past nine years—so “Sell in June” might be more appropriate. In addition, various sentiment signals we follow are showing extreme caution and fear, potentially bullish from a contrarian point of view. The CBOE VIX Index (VIX) recently spiked above 30, consistent with stock market lows. Various sentiment polls are flashing extreme fear, while money managers are sitting on a good deal of cash as well. Lastly, we don’t see a recession in 2022, and despite lackluster Q1 gross domestic product (GDP) reported on April 28, we continue to expect economic growth of 3% this year, led by strong corporate earnings, accelerating business investment, and a healthy consumer.

Here’s the catch—and there’s always a catch: These ‘worst six months of the year’ have been quite strong lately. In fact, stocks gained nine of the past 10 years during these six months, as you can see in [Figure 2]. So, although our guard is up for some potential seasonal weakness and choppy action, be aware it could be short-lived and consider using it as a buying opportunity.

Is this actually normal?

Clearly 2022 has been one of the worst starts to a year ever for stocks, but how rare is it? Here are some statistics to potentially help calm some nerves.

As [Figure 3] shows, the correction so far in 2022 is line with an average correction. 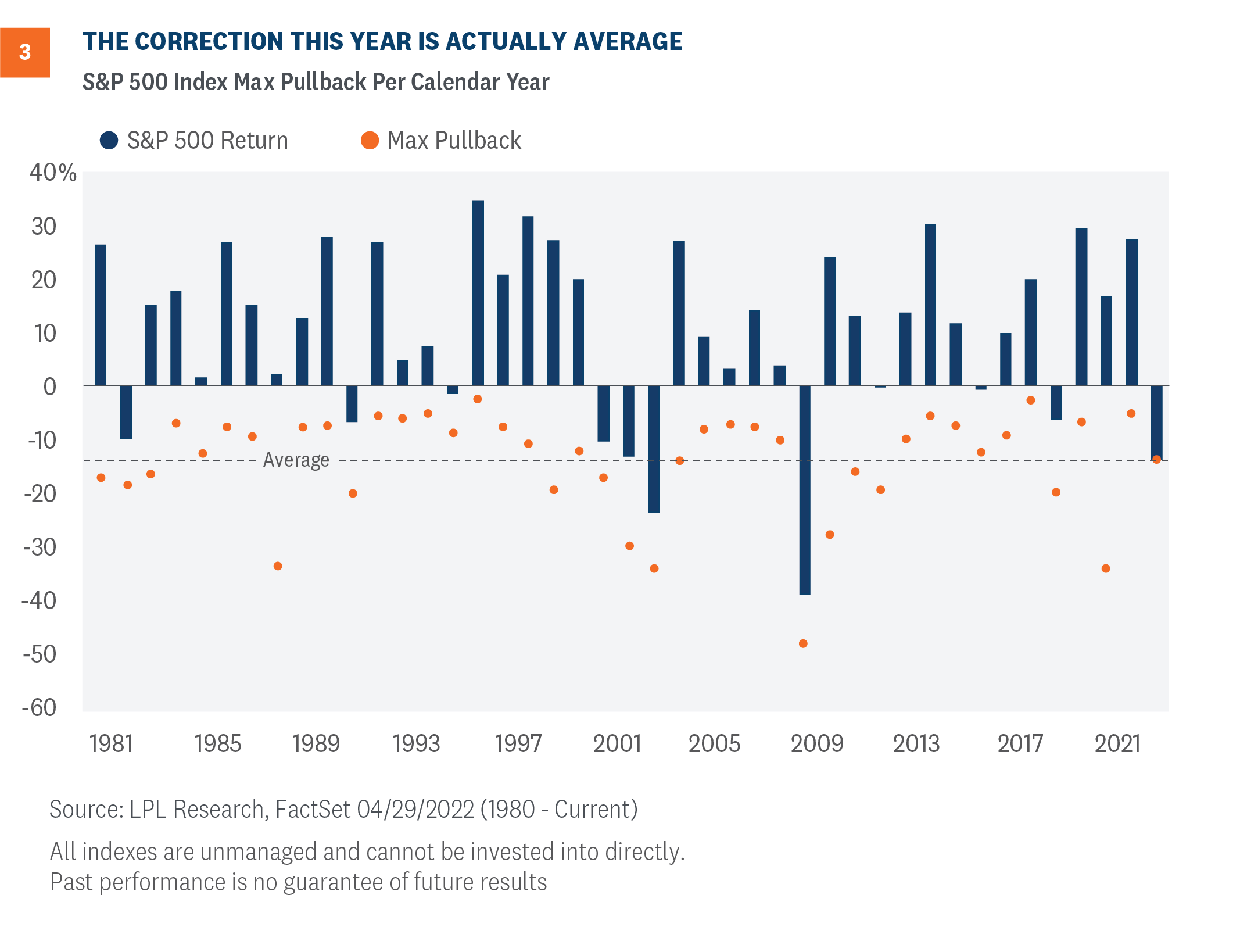 The media will have fun with the “Sell in May” warning to drive up clicks and views. Although you can’t argue that these months historically have been weak, they still sport a positive return, so totally going away may not be wise. With sentiment flashing extreme caution, a healthy consumer, and strong corporate earnings, going away this May is something we would not subscribe to.

We continue to prefer a modest overweight allocation to equities and a slight underweight to fixed income relative to investors’ targets, as appropriate. Our year-end 2022 fair value target for the S&P 500 is 4,800–4,900, based on a price-to-earnings ratio of 20.5, and our 2023 S&P 500 earnings forecast of $235 per share.