Which Region Will Get the Gold in 2022

The near-10% correction in the S&P 500 Index and even larger drawdown in the Nasdaq have gotten a lot of attention this year. What hasn’t gotten as much attention—and maybe surprising to some—is the relative resilience in equity markets outside the U.S. In our special Winter Olympics edition of the Weekly Market Commentary, we hand out medals to the U.S., developed international, and emerging markets. Who do we think will get the gold? Read on to find out.

U.S. Has Been Skiing Uphill

It’s been a rough start to the year for U.S. stocks with some stiff headwinds. The path of the S&P 500 in January looked like something Mikaela Shiffrin might ski on given the steepness of the decline with twists and turns. Fears that the Federal Reserve (Fed) might be behind the curve in its inflation battle got most of the blame for the market selloff, while a few high-profile earnings misses—Meta (Facebook) being the latest—have added to investors’ anxiety levels.

Meanwhile, the international equity markets have held up relatively well. The S&P 500 Index is down 5.6% year to date, outrun by the 3.8% and 0.9% declines in the MSCI EAFE Index (developed international equities) and the MSCI Emerging Markets (EM) Index. To assess which regional market might come out on top at the end of the 2022 competition, we take a look at global fundamentals, valuations, and technicals.

Economic Growth Likely to be a Close Race

Starting with economic growth outlooks, emerging markets may produce the fastest gross domestic product (GDP) growth in 2022, but it could be a close finish [Figure 1].

China’s zero-COVID-19 policy may delay the restoration of the EM growth premium while we wait for an eventual end to the pandemic. Meanwhile, distressed property developers present a headwind to growth, though monetary stimulus is helping turn the tide some in China in the near term.

We expect developed international and U.S. economies to generate similar growth in 2022, though rising forecasts for Japan are encouraging. Europe may also see more benefit from pandemic-related pent-up demand as the region is earlier in its economic cycle than the U.S. And U.S. growth has gotten off to a slow start in the first quarter because of the Omicron variant.

U.S. the Clear Favorite in the Earnings Event

The U.S. comes into 2022 as the earnings favorite. Consensus estimates are calling for a 9% increase in S&P 500 earnings this year, ahead of the 5% and 7% increases expected for developed international markets and EM, respectively. As shown in Figure 2, U.S. earnings estimates have marched steadily higher over the past year, outpacing the increases outside of the U.S. 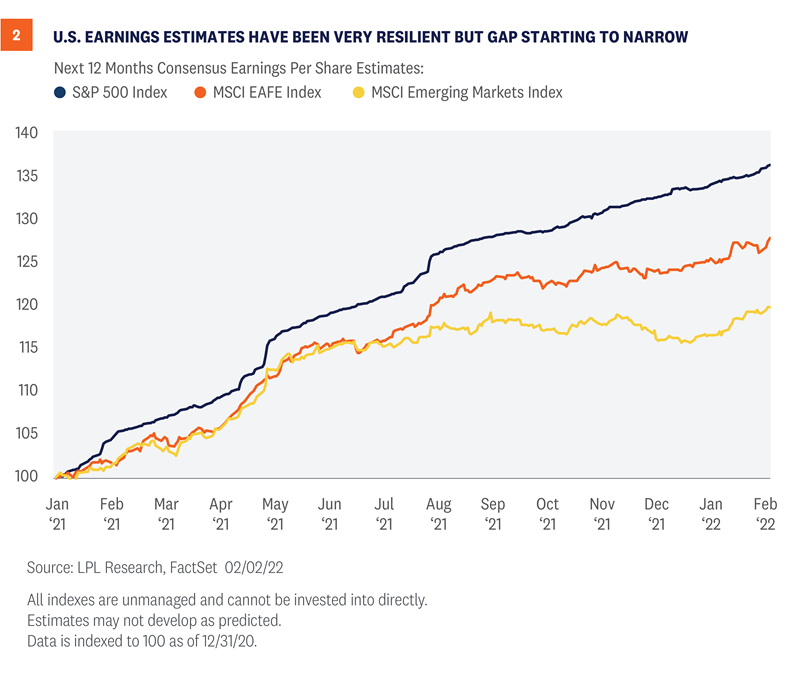 While it’s tempting to think EM will generate better earnings growth because economic growth is better, EM companies have had a difficult time translating economic growth into profits over the past decade (certainly part of the reason why valuations are low in EM, as discussed below). In addition, China’s regulatory crackdown still presents earnings risk even though the headlines have settled down.

On the flip side, the recent increase in EM earnings estimates for 2022 is encouraging (2.7% over the past month, compared to 1.5% for the U.S. and 2.3% for developed international). So while we consider EM an earnings underdog in 2022 and consider it more of a show-me story, it’s only a small hit to its medal hopes.

U.S. Skating on Thin Ice When it Comes to Valuations

The valuation competition is the clearest cut. Figure 3 shows that U.S. stocks continue to trade at a significant premium to their international and EM counterparts and have for a long time. 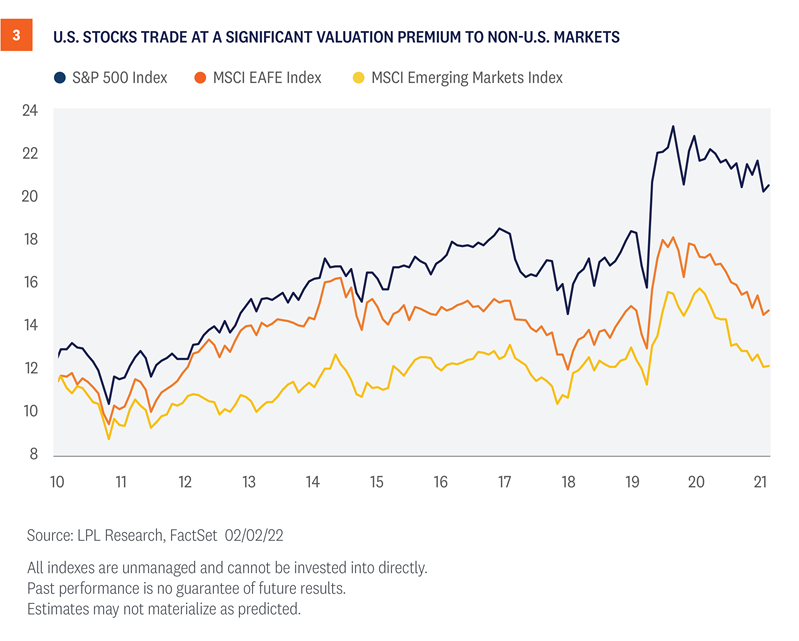 In fact, developed international stocks, measured by the MSCI EAFE Index, are trading at a 28% discount to the S&P 500 on a forward price-to-earnings (PE) basis. That discount is the largest in at least 30 years, and probably much more if we had data going back farther.

Emerging market stock valuations are not in uncharted territory like developed international, but at a 40% discount to the S&P 500’s forward PE, a 20-year low, EM is clearly attractively valued. If we knew the earnings would come through this year, EM would warrant consideration for the gold medal in the valuation competition, but we’ll give it to developed international given the unprecedented discount and greater earnings predictability.

When we compare the charts of developed international and emerging markets to the U.S., the trend still favors a home-country bias. Relative to the S&P 500, both the MSCI EAFE and MSCI EM indexes remain below downward sloping 200-day moving averages, a simple but effective measure of a downtrend.

That said, we’re open to the idea of that trend changing at some point in 2022. Both regions have outperformed the U.S. year to date, but for unique reasons. Developed international markets such as Europe and Japan, which are more value-oriented markets, have benefited from having fewer high-flying tech stocks, while some segments of the Chinese technology sector have finally begun to show signs of stabilization after falling more than 50% last year.

Developed international and emerging markets have been making some pretty good runs lately. Many investors expected little out of them coming into this year following a series of slips and falls over the past decade. These markets are more attractively valued, may get a boost if the U.S. dollar weakens, and have seen earnings estimates rise recently, all of which introduce the possibility of a durable shift in global leadership.

But the U.S. is the defending champion. The home team is still in a good position for a silver for economic growth, remains the gold medal favorite in the earnings competition, and possesses a better performance trend than developed international or EM despite the slow start to this year. Our technical analysis work puts the U.S. at least in the hunt for a gold.

The S&P 500’s scores have not kept up with these other markets so far in 2022, but the opening ceremony just happened. We continue to believe U.S. equities could outperform their international and EM counterparts this year, though likely in a much closer race than we saw in 2021.

We put the U.S. as the gold medal favorite, with developed international and EM slightly behind battling it out for silver. Tune in, this should be an entertaining race.